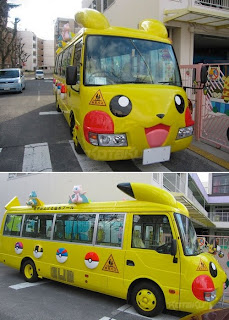 So I thought I might ride my bike everywhere for the rest of my life, then I found this bus. Will ride 'til I die. I imagine every seat having a charger for your DS, is constantly playing Pokemon anime episodes, and riders only talk to each other by saying their own name.
Try only saying your name for a day, and see where that gets you. Not as far as Pikachu I'll tell you that much. 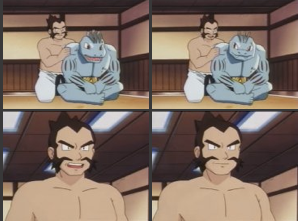 On a game related note, I just evolved my Machop into a Machoke. Which more importantly means I know own the only underwear wearing Pokemon. Oh yeah, looking for Machoke pictures definitely granted me access to the most homoerotic Pokemon pictures I've come across yet. HAY GUYS I BET IF HE WEARS UNDERWEAR HE PROLLY HAS A PIG HONKIN' DICK SO IF YOU COULD DRAW THAT I COULD BE A BETTER POKEMON MASTER!
at 12:55 PM