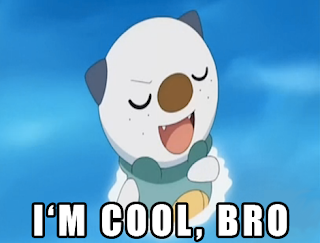 So it's been a while since I've updated this blog, but I think I'm gonna try to start writing again. Problem was that I got Pokemon White. In the first week I had it, I think I put around 60 hours into it. I did a lot of crazy things and made a lot of crazy promises in order to maintain that amount of playtime, but now that I've got a clean pair of pants and a set of eyes that aren't distorted by the soothing glow of a Nintendo DS screen at 1am, I'm in the right state of mind to blog about it.

First thing, picking a starter for Pokemon Black and White. Here's a brief explanation of the Pokemon.

1. Tepig: For fucking winners. I've never gotten a fire starter before, but I am usually real bummed about trying to find a cool Fire-mon so I got my Tepig. His second evolution is absolutely tough guy. Last is a jock powerhouse. Into this guy.
2. Oshowatt: Who would've guessed that Otters evolved into Walruses? Not this guy.
3. Snivy: Nobody uses Grass Pokemon because their type weaknesses are disgusting (Poison, Flying, Fire, Ice, Bug). Plus Snivy is arrogant. Arrogant and ignorant. Nunuh that on my team.

And yes, I got the White version for the same reason I use Tom's toothpaste. I am a goddam hippie-shit.
at 6:03 PM