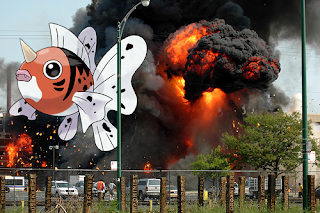 There has been a lot of talk recently about the raising of the debt-Seaking, so I thought this would be a good time to explain its significance in the the process of financial responsibility in the United States.

In 1929, the stock market crashed causing millions of people to lose their jobs, homes, and even their Pokemon. Pokecenters closed down, shops were empty, and crops destroyed. It was a difficult time for all. However one positive thing did some out of it, The Debt Seaking.

When things were at their darkest, and it looked like the United States would run out of usable Pokemon and black-out, a wave began in the Atlantic Ocean. Now, obviously many waves begin in the Atlantic Ocean everyday, but this one was special. It was caused by a Seaking, and he came bearing the gift of debt forgiveness.

On the shore of New York City a giant Seaking splashed up and dove into the metropolis, destroying many buildings, killing trainers, and bringing a terrible flood in it's wake. However, as that wave conquered the land, it dragged with it gold coins. Millions and millions of gold coins. The stock market flooded with gold, people were able to pay banks to get their homes back, and everyone was 100% perfect. Then, the Seaking flopped around until it retired back into the ocean.

Today, we have just seen that the government has voted to "Raise the Debt-Seaking" again. Scientists are currently hard at work trying to locate the beautiful beast and request it's forgiveness again. So now we must wait for the horned sea-angel to rid us of our filth and protect us from the one thing that plagues every trainer... a total black-out.
at 2:45 PM