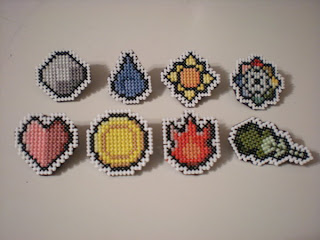 Now that I have a bit more free time in my day, I've had an eminent urge to write some Pokemon epics throughout the weeks. However, without any real prose training I'll settle for updating my blog.

It's Christmas time in the real world, which I think means its like... mochi mochi ice cream desu day in Pokemon or something. So if you have some fanatics on your list, let me let you in on a few items to throw their way...

1. Pokemon Badges. For my little brother's birthday, which is around Christmas, I got him a set of crocheted (not actually, but I don't know what the technique is called) badges. They are impeccably hand-made from the crafter HardcoreEskimoKisses on Etsy. I couldn't be more happy with how amazing these look. She only made one run of each, and they are pretty much all gone by now, but maybe you can bug her to make you some more. 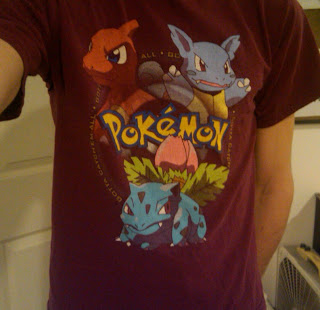 2. This shirt. Actually, it's mine. One of my many rare Pokemon finds in the fields of Kanto. In the Union Cave I had a battle with Pokemaniac Larry with a lot on the line. After a quick 1-2 Punch from a Hitmonchan, his Slowpoke had to throw in the towel. When asked for my monetary reward the fanatic pulled out pockets that consisted of puffin crumbs. I settled for this rare shirt of the second evolution of the first generation starters. Wartortle is obviously the coolest. Oh yeah, you can't have this shirt. Look on ebay or something, but it's probably like a billion gold.
3. Pokemon Rumble Blast. This game looks amazing, and chances are your significant other, or significant brother, is getting a 3DS in honor our Lord and savior's birthday. So why not get a game that lets you crank up some Pokemon toys and have them fight in a battle royale death match. In this game the Pokemon actually do die. So just be careful, because you'll ruin the game for everyone if Pikachu dies.

4. Mrs Wubby Pokemon card. (Link) One of the rarest and definitely the most confusing and pedofilia inducing cards ever printed. Fans of all ages screamed in outrage when this one-of-a-kind non-Pokemon, Pokemon card was printed. Not only is it blasphemous, but it is incredibly overpowered. 200HP with no previous evolution necessary? A smile that stuns 100% of the time!? A CHICHI GUN!!?!?!?! CHRIST! If you really want to tear up the pro-circuit this season, get 3 of these in your deck. Act now, because after this report, I imagine record sales will shortly follow. (Tubby wubby ain't too bad either.)
at 2:57 PM